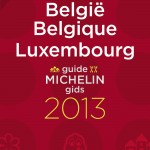 The Michelin Guide has announced 2013′s stars for Belgium and Luxembourg. While the three-star restaurants in Belgium have remained the same (De Karmeliet in Bruges,Hertog Jan in Bruges and Hof van Cleve in Kruishoutem), La Duree in Izegem has gotten its second star for the first time. Additionally,L’Air du Temps retained its second star despite moving to the town of Liernu. Belgium now has 16 two star restaurants. Michelin also added ten Belgian one-stars to the 2013 guide.

Luxembourg did not receive any new stars, with the two-star Mosconi in Luxembourg City and ten one-star restaurants holding on to their ratings.