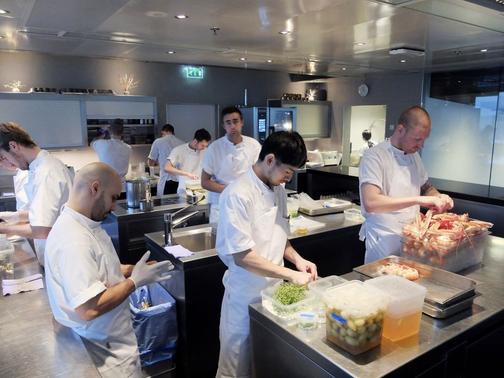 Maaemo – old Finnish for All That Lives – received two Michelin stars 15 months after opening in 2010, in its first mention, and ranks 79th in the top 100 of the world’s best restaurants, according to Restaurant Magazine.

It is a standard-bearer for a quiet revolution in Norway, a poor country turned rich partly thanks to its oil wealth where, in the 1970s, Italian restaurants used to serve pizza with a side order of potatoes to reassure diners that, if they didn’t like the main dish, they would still have something to eat.

Bang, a 32-year-old Dane sporting a large tattoo of the ravens of the Norse God Odin on his left arm, spoke to Reuters at his restaurant while staff prepped for the evening sitting.

Q: What are you trying to achieve with Maaemo?

A: We wanted very much to open a Norwegian restaurant that reflects where we are and in doing so create a more progressive cuisine compared to the other restaurants that were there when we opened. They used Norwegian produce, but it was always cooked in a French way and mixed with French ingredients.

We wanted something that was more in a “Dogma” situation (a stripped-down style with strict rules pioneered – in cinematographic terms – by Danish director Lars von Trier). To be very creative, one needs to set limits. Without limitations, I cannot function.

Q: What were the limitations?

A: Only Norwegian produce. No imports whatsoever. In Norway, it is quite difficult because of the climate and there is a long tradition of using imported produce. We also wanted everything to be organic, biodynamic or wild. It was very, very difficult in the beginning to find suppliers because no one had done this before.

I would tell a farmer: “I would really like to use some of your produce in the restaurant” and he would not quite understand because he could sell large amount of vegetables with the big companies and I wanted to buy directly from him.

Also there was no infrastructure in place to make deliveries to the restaurant, so we had to get it ourselves. It was very time consuming. I would not say it is easier now, but we have made it more accessible. And now we have made a name, people contact us to offer their produce.

Q: What about the diners?

A: People were quite skeptical at the beginning. We were not a typical restaurant. I don’t use a lot of meat or protein and that was a big hurdle because some people want a large piece of meat on their plates. It is funny. Often in Norway, it takes a little bit of international recognition before they start to recognize something themselves.

Q: Do you think the food culture in Norway is changing?

A: The restaurants that are opening now, they seem to do something more personal. They try to not think too much about what it is that people want. They focus more on what it is they want to do. I hope that somehow we were part of that. In Norway, no one has done this before. We just did it, and we are learning by doing and we learn as we go. To me it is very exciting, you are not stuck in a box.

Q: Why the emphasis on organic, wild and biodynamic food?

A: I don’t want to use vegetables that have been poisoned, sprayed with pesticides. It is a natural choice. The biodynamic is taking it one step further than the organic: it is so much better because the people who grow that way have a passion for what they do.

Q: What was it like to receive two Michelin stars in such a short time?

A: It was insane. It still has not quite sunk in. I was maybe hoping for one star. When I saw two, I thought it was a typo.

This is a dish that’s been on our menu virtually since we opened, and it’s a showcase of the impeccable quality of shellfish in Norway. Here, we combine langoustine with the flavors of the forest, infusing the sweet flesh of the shellfish with a gentle aroma of spruce.

In the restaurant we serve the langoustines nestled on a bed of spruce branches which itself sits atop some dry ice. A warm spruce infusion is poured over the dry ice, which sends billowy spruce-­scented clouds wafting across the table.

If you’re making this at home this step is entirely optional, but the effect is very dramatic.

1. (optional) If making the spruce infusion to pour over the dry ice, start by placing the spruce branches in a saucepan and cover them with the water. Bring the water to the boil and cover the pot with cling film to prevent any steam from escaping. Turn down the heat to the lowest setting and leave it overnight.

2. (optional) The next morning strain the mixture, reserving the liquid. Pass the liquid through a fine strainer or cloth net. Store in a cool place.

3. To make the pickled spruce, bring the pickle brine to the boil and add the spruce shoots and then turn off the heat. Keep in an airtight container and refrigerate until needed.

4. To make the spruce butter, place the butter and the spruce in a vacuum bag. Place in a water bath set at 80˚C for 10 hours. Strain through a fine sieve and refrigerate.

5. To make the pickled spruce gel, place the vinegar, sugar, agar powder and 10g of the pickling liquid from the spruce shoots in a pot and bring to a boil while whisking. Turn down to a simmer and continue to whisk for 1 minute.

6. While the mixture is still hot, pour it into a blender and add 5g of the pickled spruce shoots. Blend on high for 1 minute. Pass through a fine strainer and refrigerate.

7. Once the mixture is completely set, return it to the blender. Blend on high while adding the rapeseed oil. Blend the mix until completely smooth. Pass through a fine strainer and refrigerate.

8. Take the langoustines and carefully separate the heads from the bodies. Place the undersides of the tails against each other and bind with elastic bands to stop them curling up while cooking.

9. Bring a pot of salted water to the boil and blanche the langoustines for 40-­60 seconds depending on their size. Refresh immediately in ice-­cold water.

10. When the langoustines are cool, carefully peel away the shell off the tail. Remove the langoustine’s digestive tract by taking the tail and holding the underside toward you, carefully remove the tract with a pair of tweezers. Wash lightly with running water if needed. Refrigerate the tails on a clean damp towel until needed.

11. Take the tails out of the fridge 10 minutes before cooking to allow them to come up to room temperature.

12. Heat a small non-­stick frying pan on medium high heat. Add a small amount of rapeseed oil. Gently place the tails in the pan, with the underside facing up.

13. Once the tails begin to caramelize add a large spoon of the spruce butter and baste the tails until just cooked through. The center of the tail should be slightly translucent.

14. Place on a paper towel and season with salt and brush the top of each tail lightly with the pickled spruce gel.

15. (optional) To serve it like we do in the restaurant, place the dry ice in the bottom of a bowl, covering it with the washed spruce branches.

16. Place one or two of the langoustine tails (depending on how many you are using) on top of the branches. At the table, pour the hot spruce infusion into the center of each bowl, onto the dry ice.

17. Eat with fingers and enjoy!