The ‘Google burger’ has reignited the debate about where the fault line between processed and unadulterated food lies. What do the experts reckon? 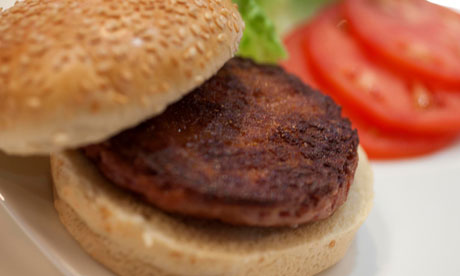 Monday’s big food news was the great reveal and taste test of a burger made of lab-raised cultured beef. It smelled like beef. It tasted like beef. It could have been juicier. Yet this remarkable advance met with a deluge of people finding the prospect icky and unnatural. When the psychologist Paul Rozin studied the prevalent preference for natural foods in five European countries and the US, his team concluded that, for many people, natural is a concept for good that is like god. “That is to say,” says Rozin, “you don’t argue with people about whether they believe in god or not and you don’t try to tell people that natural isn’t really good.”

This penchant for purity is a mammoth economic factor. The trade publication Food Manufacture reports it as the top UK trend for 2013. And in 2011, a global poll of 5,000 people by consumer researcher company Nielsen found that 92% worry about artificial colouring agents and 78% are willing to pay a premium for natural alternatives. But it is impossible to police the commercial usage of such an ambiguous term, and with so many mass-produced, heavily processed items masquerading as natural foods, is the entire concept poppycock?

It’s tricky. Even Food Manufacture puts the word in inverted commas: “The march to all things ‘natural’ is likely to persist as consumers increasingly buy into the perceived healthiness of the additive-free or ‘natural’ proposition.” Says it all, really. When the anthropologist Jeremy MacClancy wrote Consuming Culture: Why We Eat What We Eat and What It Says About Us, in 1992, the Oxford English Dictionary offered 26 definitions for natural, and he saw the concept of natural foods as a cynical marketing ploy. Since then, he says, he hasn’t seen, “any good reasons to make me change my views”.

The reasoning behind our preference for unadulterated food is quite patchy. Most of our diet has been cultivated and processed. Wine, chocolate and so many immensely popular products that we are often led to associate with a raw ingredient are human constructions. Where’s the cut-off between natural and unnatural? In Rozin’s research the two essential qualities of natural were “no human processing” and “no additives”. People were much more sniffy about adding things than removing them. Skimmed milk was rated more natural than whole milk with added vitamin D.

Organic is a more specific and regulated term. Charles Spence, the Oxford experimental psychologist, writes in his forthcoming book The Perfect Meal: “cognitive neuroscientists have found that food labelled as organic can lead to increased activity in the ventral striatum, a part of the brain involved in controlling our motivation to eat and acquire food.”

The treat section is a big appeal of health-food stores. I was once at a vast branch of Wholefoods in New York, where idiosyncratically shaped cookies were foisted on anyone who had to wait in line at the checkouts. A 2010 study (PDF) found that people rated cookies as lower in calories when labelled organic. It also found that people with weight-loss goals were more likely to forgo exercise if they’d chosen an organic dessert rather than a conventional one. You may scoff at this, but intelligent folks are more than capable of temporary fuzzy logic to justify instant gratification. In reality, natural doesn’t always signify healthy. As Rozin points out, what could be more natural than death? “It’s misinformation really – natural is unrelated to health.”

There’s natural, and then there’s disgusting

Spence puckishly suggests that the power of natural-style labelling could be harnessed to encourage westerners to eat critters for our economic and environmental good. “Insects are natural, right?” he reasons. “Though we will probably need to think of some pretty fancy naming strategies to get people eating such a nutritious food source.” Wild, organic land shrimps? Crunchy, toasted eco puffs? Pure critter fritters?

The notion of molecular gastronomy rather turned the distaste for “unnatural” on its head. Diners embraced the haute-cuisine application of scientific food-processing techniques that many frown upon in mass-produced products. When I mention this to Spence, who has worked with Heston Blumenthal, he agrees and says: “From my reading of things, companies like Firmenich – one of world’s largest flavour and fragrance houses – were funding people like Blumenthal a decade ago precisely to try and change the public’s perception of ‘synthetic’ and ‘scientific’ in mass food via their acceptance of it in modernist cuisine.”

I’m not sure if that was achieved. The idea of factory-made food will always make diners a little uneasy, whereas a team of perfectionist chefs in a pricey restaurant is far more acceptable – until they give you norovirus, that is. Spence also points out that for every craze, there’s a counter trend, like the slow food movement.

How do you define natural food, and is it always healthier and environmentally friendly? Rozin rightly says you can’t generalise, and should take things case by case. “Additives such as preservatives can keep food from decaying and reduce illness,” he says, while “other things that are additives may have some carcinogenic property and don’t really add much value.” Trouble is, who has the time to thoroughly research it all?